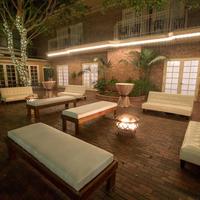 Excellent
based on 1,622 reviews
Compare vs. KAYAK |

The Horton Grand Hotel is located in the heart of the downtown San Diego area, and it is one of the most famous hotels in the city thanks to the rich history it offers. This hotel was originally built in the late 1800s, but it was torn down in the 1970s, with the bricks being numbered when were removed. It was rebuilt in 1986.

The rooms at the hotel include a range of amenities and features, including air conditioning and free wireless Internet. There are connecting in adjoining rooms available. The rooms have blackout drapes, and the rooms are individually decorated. Rooms also have HD TVs with premium channels, along with a coffee/tea maker, iron and ironing board, private bathroom, desk, and hair dryer. Guests will even find fireplaces in the rooms.

The Horton Grand hotel has a 24hr front desk, meeting rooms, free wireless Internet in some of the public areas, conference space, valet parking, and laundry/dry cleaning service. In addition, guests can dine and enjoy drinks at the on-site restaurant and bar called the Salt & Whiskey.

Located in the Gaslamp Quarter of San Diego, guests will find plenty of other places to dine and drink within walking distance. Some of those places include restaurants such as Royal India, Prohibition San Diego, Gaslamp Pizza, Werewolf, Monkey King, Patron’s Corner, and the Whiskey House. The location means guests will also only be a short distance from all that San Diego has to offer, such as Seaport Village, the Convention Center, Marina Park, Horton Plaza, and so much more.

Where is Horton Grand Hotel located?

When is check-in time and check-out time at Horton Grand Hotel?

No, Horton Grand Hotel does not offer free parking.

How far is Horton Grand Hotel from the airport?

Can you bring pets to Horton Grand Hotel?

Does Horton Grand Hotel have a pool?

No, Horton Grand Hotel does not have a pool on-site.

Learn about San Diego on KAYAK