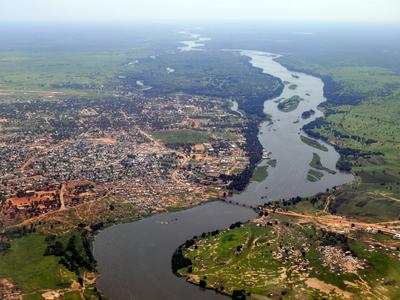 How long is the flight to South Sudan?

An average direct flight from Canada to South Sudan takes 27h 23m, covering a distance of 11132 km. The most popular route is Montreal - Juba with an average flight time of 26h 25m.

What is the cheapest flight to South Sudan?

What is the most popular destination in South Sudan?

Based on KAYAK flight searches, the most popular destination is Juba (100% of total searches to South Sudan).

Pros: "Good leg space and entertainment options"
Cons: "I was eligible for a complimentary hotel for my connection. However, in none of my correspondence was mentioned that I'm supposed to request a hotel ahead of departure. No emails from Kayak and neither Emirates. This is extremely disappointing and unnecessarily costly"

Pros: "amazing customer service. great seats and interior. well on schedule."
Cons: "no window seats were available just some time after check in was open(at least when i got notification). Got airplane ears- pressure issue. This has never happened to me before."

Pros: "Food is good."
Cons: "Seats could have worked well. Infotainment could be better"

Pros: "Flight was delayed for 6 hours while we are in the plane, on top of my 13 hour flight"
Cons: "letting people know that flight will be delayed ahead of time"

Pros: "Leg room was excellent I even enjoyed the meals nice to have real cutlery rather than plastic Very efficient and smooth boarding Return of checked luggage upon arrival was prompt and efficient Flight attendants were super conscientious, friendly and VERY professional"
Cons: "Everything was GREAT"

Pros: "On time boarding . Crew was helpful"
Cons: "Food was not satisfactory"

Pros: "Pleasantly surprised by the meals. The crew were professional, attentive, and friendly. The seat I chose had plenty of leg space and I will select it again the next time I fly with Emirates."
Cons: "The toilet seat covers were finished so I spent a lot of time lining the seat with toilet paper."

Pros: "Usual overall great service."
Cons: "They were stingy with the beverages. No sodas until 2/3 way through the flight, and small, infrequent cups of water, all while running an “ad” telling me to stay hydrated."

Pros: "All usual good emirates services were back"
Cons: "Didn't find anything worth mentioning"

Pros: "A footrest would make the flight perfect."
Cons: "No footrest. Legs got tired. Felt like lifting them up."

Cons: "the boarding process was awful. they called for people to go into the pregate area at and the plane had not yet arrived. once in the pregate area the is no access to food or water and you cannot bring in a bottle of water from the terminal"

Pros: "Spacious for the kid to walk"
Cons: "For this flight boarding was smooth as my previous flight was late and an Emirates employee ran us through security and to this flight on time. For the people reading this review who might think my kid would have been messy or cranky on the flight so we were treated this way, that was not the case, she not even cried once or made a mess. Same as my previous flight with crew, Crew were so late in responses, my wife actually walked to their place 2 times to get milk for the baby. Also she was not served food at all when they served breakfast. We requested Hindu meal and I was served hindu meal and she was missed and when they served lunch she was told she has not requested prior to the flight and can only be served a regular meal, which she gladly accepted. Kid was not served any food again, so we gave her solid from our meal. When we requested some food for the baby she was given a banana baby food(Kid did not even eat it). Taste of the food was edible(Not great). Overall do not fly emirates with a kid"

Pros: "Food , entertainment and service"
Cons: "The seats were a little hard. The checkin process was terrible. They ran out of dishes from the menu in the first meal served on board."

Pros: "staff is nice"
Cons: "Seats are not as comfortable as other airlines. Baggage lost. Took 30 hours for us to receive. Flight to jfk seems to be cancelled due to weather, but it is very unclear due to no communication from Emirates."

Cons: "i had bought $150 worth goods in NY dutyfree, so it wasnt chked in. But Emirates delayed the 1st flight by 2 hpurs, which caused me to miss my 2nd connecting flight at Dubai. And bvos of that, Emirates staff didnt allow me to chkin my dutyfree stuff which they threw away.. i want to be compensated for that."

Cons: "This was a fraudulent charge!!"

Pros: "Consistent service"
Cons: "Toilets not very clean towards the end of the flight"

Pros: "Service from staff"
Cons: "Disembarking for passengers needing wheelchair was prolonged and cumbersome; As a result,my one suitcase was lost by another passenger picking up my bag and I ended up spending 3 extra hours at the airport completing formalities!"

Pros: "Food was good and not over salted like most airplane foods"
Cons: "Need more recently released US movies Options are so few Not enough African movie either"

Pros: "The flight was superb."
Cons: "Nothing. Will always fly Emirates whenever I get the chance."

Pros: "The flight crew we're fine and helpful if you needed something."
Cons: "The TV for my seat would cut out when the person in front of me reclined. The charging plug also didn't work."

Pros: "- Friendly crew, they managed to get my wife and I to sit together against all odds - Seats are more comfortable than other A380 configurations"
Cons: "- Crew's organization was confusing and all meals and services got surprisingly long to complete. - Most of the time there were no drinks available for passengers to grab and go, and you had to ask specifically even to get water. - Outside of the scheduled meals, there were very few passes to offer drinks to passengers - Entertainment system had great choices but the system ran with lag and lost frames every few seconds (not only in mine, but rather across the cabin)"

Cons: "Very late. Caused us to miss outlet rental car. Left us stranded at the airport."

Pros: "Flew Emirates coach Washington to Dubai to Johannesburg and Bangkok to Dubai to Washington in July 2017. New A380-800 planes were superb. Entertainment system is second to none. Staff is efficient and polite. Except for the "required crying babies" on each leg the plane is very quiet and peaceful. The check-in, however is a zoo. But better to put your best employees on the flights rather than on the ground."

Cons: "Crew woke us up to ask us if we wanted food. I've only ever been woken up before for safety reasons (seat belts, etc) We were not impressed with the arrival in Dubai. We came in a large plane and had to deplane very far from the terminal onto buses, down a long set of stairs. They did not send enough buses so we waited on the hot outside stairs for about 15 minutes. It took us a full 45+ minutes from landing to get to the actual terminal. We were grateful we had a long layover or we would not have made our connecting flight!"

Pros: "Overall was good"
Cons: "Didn't live up to expectations. Halfway through a 10 hour flight the entertainment system went down. It took a few times of calling the stewards to actually communicate the issue and inexplicably the system was never reset until 15 minutes before landing. I understand things happen but communication was lacking and slow."

Pros: "Same excellent service and quality as the flight from Boston to Dubai. Flight was on time. Everything went very smoothly."
Cons: "The passenger next to me had a bad cough during the whole flight. Wish I could have moved."

Cons: "missed the flight to seattle due to emirates delays, total travel time was 50 hours instead of 20, what a nightmare"

Cons: "How one of your crew member expressed herself to another crew member regarding the passenger next to me. just because he asked her what type of vegetable were in the eggs. Your crew member was very inconsiderate. All she had to do was answer the question and not make any other comment to her co-worker (Joyanne) about how she wish they (meaning ) passengers would read the menu. I was very disappointed about her comment. Even worst, to see how inconsiderate she was and how she did not even considered if this gentleman could read, or did not have his eyewear. I believe her comment was unnecessary and inappropriate at the time. I could not quite get her name, but she does not need to deal with the public."

Pros: "Very friendly and helpful crew; comfortable within the limits of economy class!"

Cons: "Not enough food and snacks"

Cons: "When it is a very full flight and every seat is needed, the space for passengers is very tight."

Cons: "We had a long layover in Dubai and decided to go out to explore the city. When we went to go back with the same carry ons that we had been using our entire trip (with three different flights with them), They made us check in our hand luggage because it was over 7kg. When we went to talk to the person at the gate about it, he was very condescending and rude and not helpful at all. They were also not nice on the plane. Never flying again."

Pros: "Love it and I had a middle seat !!!!"
Cons: "The food was good v and excellent service and entertainment"

Cons: "Had some problems with the touch screen entertainment system which meant I was somewhat limited in the program's I could view. Other passengers seemed to have a similar problem. Did not speak to crew member as i did not realize at the time that others had a problem. Thought it was just an issue for me."

Pros: "Everything was great. They have it together."

Pros: "Entertainment and comfort are nice"
Cons: "Food quality and service were mediocre at best"

Cons: "This was my first time flying Emirates, and my very first flight from JFK to DXB was so late that I ended up missing my DXB-DEL connection and had to waste over 8 hours of my time and bear a lot of discomfort"

Masks required on board, masks provided on flights to South Sudan

Middle seats unavailable to book on flights to South Sudan

Testing for antibodies, testing for symptoms for flights to South Sudan