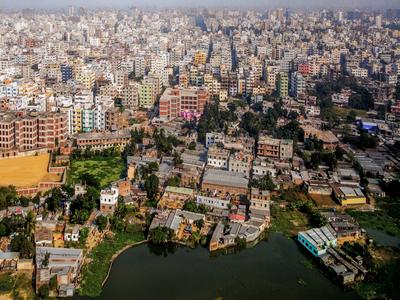 How long is the flight to Bangladesh?

An average direct flight from Canada to Bangladesh takes 31h 37m, covering a distance of 11966 km. The most popular route is Toronto - Dhaka with an average flight time of 19h 55m.

What is the cheapest flight to Bangladesh?

What are the most popular destinations in Bangladesh?

Which airport should I fly into in Bangladesh?

The vast majority of international flights to Bangladesh arrive at Shahjalal International Airport, which is the biggest airport and services the capital city of Dhaka. Due to its central location, it is a great starting point for a journey. National carriers Biman Bangladesh Airlines, Regent Airways and Novoair are all based at this airport so that you can catch connecting flights to domestic airports across the country.

Do I need a visa to travel to Bangladesh?

Canadian citizens do need a visa to visit Bangladesh and are strongly advised to obtain this prior to their departure by contacting the Bangladesh High Commission. Tourist visas are approved for stays of up to 30 days and your passport must be valid for at least 6 months at the time of your arrival in Bangladesh.

What are the most convenient flights to Bangladesh?

While there are no nonstop flights from Canada, you can find cheap connections with a single layover. Carriers such as Qatar Airways, Emirates and Turkish Airlines connect major Canadian airports with Dhaka Shahjalal International Airport (DAC) via a layover at their respective Middle Eastern hubs. If you are flying from the west coast, you might find more favourable connections with airlines such as Cathay Pacific and China Southern that involve a stopover at an Asian airport.

I want to travel to the southern region and visit the beaches. Where should I fly into?

If you are planning a trip to the southern part of Bangladesh, consider flying into Shah Amanat International Airport (CGP) which services Chittagong, the biggest port city in Bangladesh. The airport handles some international flights from countries including the United Arab Emirates, Qatar and Oman, so you might find a convenient connection from Canada with a layover at a major Middle Eastern hub. Chittagong's central location on Bangladesh's coast makes it the perfect starting point for your journey.

Pros: "CREW WAS GOOD FOOD AND SERVICE WAS TERRIBLE"
Cons: "NO SEAT MONITOR WAS WORKING. ANNOUNCEMENT WAS TERRIBLE.SEAT WAS MUTILATED FOOT REST WAS NOT WORKING.OVER ALL VERY POOR SERVICE."

Pros: "The Turkish crew is very attentive and nice."
Cons: "Turkish airlines is perennially late. I’ve either missed my connection or had to run to my gate every single time I’ve flown internationally with them. This seems to be pretty well known among the travelers that use them often."

Pros: "Food was great, service was also amazing."
Cons: "The seats are so small and so uncomfortable, it almost made the 11hr flight unbeatable"

Cons: "Need spacious aircrafts for such a long flight.."

Pros: "Staff is the best, very accommodating."
Cons: "It was an old plane so not much comfort in business class"

Pros: "I did not like anything from this trip. I just learned my lesson not to travel with turkish airlines ever again."
Cons: "flight was canceled from previous flight so we had to overnight in istambul and the whole situation was handled very poorly nobody took the time to explain to me what to do and mind this I was traveling with three year old and I found myself crying at midnight at the airport not knowing what to do."

Pros: "Left on time, arrived on time, crew were friendly and efficient, toilets were kept clean the entire flight, seat in economy had enough leg room and recline to sleep"
Cons: "In-flight entertainment films were a bit limited"

Cons: "Vegetarian meals can be better"

Pros: "The seat was somewhat comfortable. the inflight movie selection was far better than my flight between jfk and ist."
Cons: "The overall crew/staff need to learn to improve their behavior and attitude towards their passengers."

Cons: "The place was too narrow"

Pros: "Crew was very good and the food excellent."
Cons: "Seat space is a little small."

Pros: "It is always better when this flight is operated by wide body aircraft, as was the case with A330 this time"

Pros: "We arrived in Athens eventually"
Cons: "People were made to wait outside in the cold airport bus for half an hour. The ground crew gave no explanation for the delay. After heavy protests, they let the waiting passengers back into the terminal. Supposedly the pilot was sick, but there was no communication at all from the airline about the cause of the delay or how long it would last."

Pros: "Full seasons of resurrection ertugrul would be appreciated. The flight really wouldn’t have felt so long"

Pros: "Attractive business class fares. Among the best business class."
Cons: "Don't underestimate the additional hours. The stopover in Istanbul is definitely a negative (crowded, unpractical airport). Next time I will probably stick to European airlines, if the fare difference is reasonable."

Cons: "The crew in Berlin gave me the last seat at the airplane which does not recline. I find this to be very unprofessional especially for some with Gold Status with Star Alliance. In addition, they assured me an aisle seat in the connecting flight, which was not the case, it was a middle seat. I felt cheated by the desk crew in Berlin."

Pros: "Leg room was OK"
Cons: "No alcohol service, cabin lights not dimmed seeing it was a late night flight."

Cons: "The temperature on board was extremely hot! Add this to body odor and you get a terrible flight."

Pros: "Food and service in business class were splendid."
Cons: "Absolutely nothing!"

Pros: "Great good entertainment n crew provided warm and courteous service"
Cons: "Terrible boarding process n the seats are not the best- not bad just not as good as everything else."

Pros: "Nothing"
Cons: "The seats in business class were not suitable for sleeping even though I paid top dollar and it was a 4:45am flight. They let a random person on the plane and had to do a full security sweep before taking off."

Pros: "Crew and flight itself was great."
Cons: "As expected, the plane and seats were okay (borderline mediocre). The food wasn't enough and the choices (rather the lack of) were poor. The seats could be better and not particularly comfortable for a long haul flight."

Pros: "I liked the food."
Cons: "On the way back from Istanbul to London the plane was old and small, the TV kept shutting down,even the earpiece were not working."

Pros: "Food was decent and the crew was great."
Cons: "The air conditioning did not work in the front part of the cabin. I asked about it but nothing changed. It was very uncomfortable for everyone in that part of the plane. The back was cool front was miserable."

Pros: "Lot of empty spaces"
Cons: "Lot of rubbish on the plane"

Pros: "The crew was really friendly and responsive. Boarding was easy and hassle free because Business class passengers had to go through a seperate gate to board."
Cons: "The food was OK, especially the appetizer as it was all cheese and since I dont like cheese, I rate it poor. The inflight entertainment was good but there was a lack of choices in music and tv shows."

Cons: "It wasn't great experience as we missed the flight back to UK. They lost my husband wheelchair and we did missed the flight. They Redbook flight which was three hours later, so missed our tax home as well. We haven't received any apologies not even offer a drink. DISAPPOINTED"

Pros: "Fantastic journey no problems at all thanks kayak....."

Pros: "Plane clean, newish. Went up, took us there, landed."
Cons: "The food - I always have a v-meal - is sadly inadequate. Not enough of it, and very unimaginative. And they always supply the same thing, unless I was just unlucky to have the same thing three times in a row. The entertainment system kept dropping playback, (crashing) so I would have to restart playing the video. Something similar happened on another Turkish flight."

Pros: "The food, crew & entertainment system"
Cons: "The flight was delayed over two hours causing great stress and worry about missing our next flight, which we did. As there were many of us on the neit flight also I wonder if any effort was made to hold that flight for us."

Pros: "Nothing"
Cons: "1. Flight late from Berlin to Istanbul. 2. That's mean missing my next flight from Istanbul to Riyadh. 3. I add extra baggage in TKL Airport : my original bag is 23 kg I have until 32kg, The extra baggage was 20kg, So I pay 247 Euro each extra kg 19 Euro. 4. In Istanbul airport they said your next flight tomorrow at 20pm. 5. I have important meeting in morning and my jop in the evening. 6. They changed my teket from turkish airline to Saudi airline 4.00pm, That's mean no different. 7. I ask about my baggage in turkish airline deck they said don't worry every thing will be okay. 8. I ask for hotel they said you have to make visa cost 60 dollars and you know I have to pay taxi and Chang money... Pla Pla, Actually this is not respecting and very bad organization. 9. I didn't make visa and stay from that time until 3.pm in primum lungs. 10. I went to Saudi airline deck to take my boarding. 11. They said you have extra baggage, I explain them that I payed already to turkish airline. 12. They said you have to go back to turkish airline deck about this extra kg's. 13. I did going back to them they said we cannot do anything, leave one bag here and we send the other one later. Actually this stupid airline and this stupid employee's dealing with me like a stupid, all my time I walk every where in that stupid airport, they just gives me orders and I have to follow like it was my mistake. 14. I showed my alfursan membership to Saudi airline deck and they helped me. 15. When I arrived to Riyadh my baggage wasn't there, this is mean that this stupid turkish people that the have to work on barbcue and haircut, but airports jop needs professional people. That's was my first and last flight with them."

Pros: "Comfortable, on time and as always good service from Turkish Airlines"

Cons: "The boarding was a little more chaotic, but the host airport has a major influence on that process."