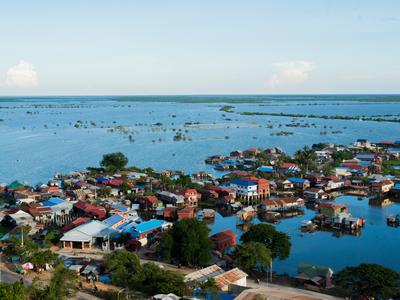 How long is the flight to Siem Reap?

An average direct flight from Canada to Siem Reap takes 39h 21m, covering a distance of 12887 km. The most popular route is Ottawa - Siem Reap with an average flight time of 47h 15m.

What is the cheapest flight to Siem Reap?

What is the most popular destination in Siem Reap?

Based on KAYAK flight searches, the most popular destination is Siem Reap (100% of total searches to Siem Reap).

Pros: "The food was very good."
Cons: "The amenities and how i was treated was poor. They cater to Chinese people only. Will not fly again."

Pros: "The washroom maintains its cleanliness. The inflight tv/movie shows is a help especially with long flight."
Cons: "Food needs improvement. Could probably offer the same menu with improve taste. The seat is not comfortable, it is somewhat hard."

Pros: "N/A"
Cons: "Kayak did not act or inform me of the need for a visa following a change in flights that occurred 12 days before flight. For this reason, my trip was canceled."

Cons: "There seems to be a continual problem with the ear buds connectors to the entertainment systems - they didn’t work for my random seat both ways! It was the same for my seat and the seat next to mine on return! We both had to be moved - again!! Hmmm!"

Cons: "Flying as a Canadian via China right now NOT RECOMMENDED! If you fly into China on China Eastern and continue with that airline for your transfer to another country, they seize your passports and keep you segregated from everyone else. Law, supposedly. Took us hours to get to our connecting flight."

Pros: "Flight was comfortable and we were well looked after by the crew. Several meals and beverage services throughout the flight."
Cons: "N/a"

Pros: "The flight was fairly smooth. There was a good selection of movies."
Cons: "Coming off the plane in Nanjing was frustrating as they were totally unorganized and the plane was delayed because of this. We had to go through customs and recheck everything. We then went back on the same plane to the same seat. Kinda confusing but all in all it was okay."

Pros: "Staff were nice until Shanghai."
Cons: "They didn't seem to want to help the disabled unless you were from China. Rude to foreigners."

Pros: "I don’t like anything"
Cons: "Food,customer service,entertainment and comfort"

Pros: "Overall I didn’t like the flight"
Cons: "Food,customer service,comfort and entertainment"

Pros: "After reading the reviews I was prepared for the worst. I was surprised on the overall quality flight with 2 full meals and plenty of drinks throughout. Plane was clean service crew was plentiful and kind. Also had a large selection of entertainment options."
Cons: "N/a"

Pros: "Good food and entertainment. Fast boarding."
Cons: "Seats were too close together. I am not a large person and I was uncomfortable. The window seat was too close to the side of the plane. Lost a bit of space. Staff not as friendly as first flight, but not rude."

Pros: "Planes were clean and relatively new."
Cons: "The flight from Delhi to Shanghai was three hours late due to bad weather wt Shanghai. China eastern agents at Delhi lied about the status of the connecting flight from Shanghai to SFO and made us start the journey knowing fully well that we will miss the connection. At Shanghai the agent and her manager were one of the most rude and incompetent folks I have come across - they took three hours to handle 50 passengers. And to top it the immigration folks were equally inefficient they took 3 hours to clear 40 ~ 50 folks for 24 hours transit visa. There were two agents and one supervisor. Do the math - 13 to 16 minutes per person. We stood in line for straight 6 hours. My wife had swollen feet for next few days. China may be great at manufacturing but service is surely not theie thing. Avoid Shanghai airport and China Eastern like the plague."

Cons: "No hotel was provided for 24 hour stay.It is mentioned on their website to provide hotel for trips from Yvr"

Pros: "Amazing service by the in flight staff! Snack and drinks non stop and so friendly."

Cons: "I didn't like the fact that every phone line I called had a really bad connection, I tried to call in regards to catching my return flight as I didn't get the departing flight. They told me it was their policy that if you miss one you miss the other. This makes no sense what so ever considering I paid $1700, I would think you could at least get half of what you paid for. The lady on the phone just kept saying "It's our policy" and not taking into consideration the circumstances. Disappointed with china Eastern airlines. I will be paying the extra money for Air Canada next time."

Pros: "Your food especially rice with ocra( what a combination ) that was great"
Cons: "I did not like your language chew mew"

Pros: "Boarding was instant. The plane wasn't full, so many people moved seats and sat comfortably. The plane was modern, with comfortable seats, and tv screens on the seats."
Cons: "The only minor drawback was the food wasn't awesome. But good flight anyway."

Pros: "Prices was good, apart from that it was all very average."
Cons: "The crew weren't that friendly and it was really hard to understand announcements over the PA. The screens were ok but the sound was awful - it made everything almost unwatchable."

Pros: "Price. On time. Good food."
Cons: "Not being able to use phone -even in airplane mode for games or entertainment. Bus ride from terminal to boarding in Shanghai"

Pros: "Food was decent"
Cons: "They've gave us the wrong flight times,had to pay and extra 100$ a head to get on the flight we were originally scheduled for. Arrived in shanghai, and again was given the wrong flights and has to stay an night in shanghai delaying our entire trip,forcing us to be a day behind for everything. Still worried our flights home won't be correct. Will never fly with then again, everyone beware."

Pros: "The attendants were very helpful, a meal was served with ever flight (even during domestic flights within China), the aircraft was clean, blankets were provided, and I felt very safe. I had an overall excellent experience with all of my China Eastern flights from LAX to Shanghai, Kunming, and Kathmandu."
Cons: "My only complaint, during the whole experience, was with the Kunming airport. They ushered overnight layover customers into the basement floor, which smelt of gas and was very cold. We were expected to sit and/or sleep on crowded seats and concrete floors. This is not a complaint about China Eastern, but rather the Kunming airport."

Pros: "Plane was loaded quickly, and efficiently..pulled away from gate a little ahead of schedule. Friendly crew."
Cons: "Food just Ok...bread rolls always served at the end of the meal,instead of with the meal."

Cons: "Uber-paranoid airline, did not allow cell phones even at cruising altitude. And a nice, (perfectly legal) camping knife mysteriously disappeared from my bag."

Pros: "Good! I slept through the whole thing."

Pros: "Good inflight movies but not good earbuds (try headphones). Some flight attendants very friendly even when having difficulty with English. Liberal baggage allowance--thank you! Good checkin experience but should ask if frequent flier miles."
Cons: "Always late--this time only 4 hours; last time 12 hours--so maybe getting better. Little or no communication with passengers while waiting hours for plane. Cabin manager very curt and unfriendly. Food not very tasty. Snacks and beverages at points during flight would help."

Cons: "We waited nearly two full hours for our bags to be delivered. And no explanation given--at least not that I heard. An agent was sent out after 90 minutes or so, but she gave no explanation, only that the bags were "coming." (She did apologize profusely.) I understand that things happen, but this was a black eye for the airline. Everything else was great."

Pros: "Didn't wake me up when sleeping when meal came Had empty seat next to me"
Cons: "Didn't have enough departure/arrival forms to distribute No wifi No soap in bathroom"

Pros: "The inflight attendents are hard working."
Cons: "The quality of food is poor and the portion is too little."

Pros: "If you can help it, do NOT travel on China Eastern. This is an airline that does NOT care about the passenger and does things the way they are done in communist dictatorships. My flight was from REP to PVG and then to ORD. The first leg (MU514) was delayed by 16 hrs - we were not told straight away about the length of the delay, every 2 hrs they would come up with a take off time and then delay it again. We spent the night at the airport - no food, no hotel. There were measely vouchers for a burger and a drink in the morning. We missed our onward flight and were delayed another 20 hrs in Shanghai. After queueing for hours we were given a hotel. A nightmare."

Cons: "Boarding was a disaster. Also flight attendants were not the most helpful and polite either and very limited in English language"

Pros: "Nothing to like."
Cons: "They cancelled our flight and notified us a couple hours before the new flight via email. They automatically put us on an earlier flight which resulted in us having a 10 hour layover during our connecting flight. Airline was impossible to get a hold of and work with. Upon arriving at airport for the new flight, they didn't have us in their system and checkin took over an hour even though we got to the airport early and were the second ones in line. will never fly China Eastern again. Airline is impossible to get a hold of over the phone and no one can help in person at airport. Worst airline with incompetent staff"

Pros: "Too many things to mention, I'll just say this: you get what you pay for!"
Cons: "Broken seats, rude staff, terrible food, delayed takeoff (1hr). Will take a more widely known airline next time, its worth the extra cost!"

Cons: "Not enough to movies"

Pros: "Cheap fare - good Keep the other expectations low and the experience is ok Having flown with them previously I think they are slowly improving, especially with their scheduling."
Cons: "China Eastern as with most China airlines is abit over strict re: use of electronic equipment Food is sad but one just needs to bring own snacks"

Pros: "Fast boarding and disembarking. The temperature was comfortably maintained. Washrooms were kept pristine."
Cons: "The tv screen kept freezing and became pixelated. The crew member was abrupt and inattentive. She missed my row completely a few times. Air pressure in the cabin during descent was not regulated properly. I have never had this much difficulty with regulating ear pressure. Others around also had more problem than usual."

Masks required on board, masks provided on flights to Siem Reap

Middle seats unavailable to book on flights to Siem Reap

Testing for antibodies, testing for symptoms for flights to Siem Reap